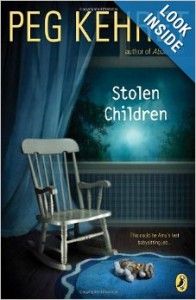 When I was small, Maud Hart Lovelace’s  books were my favorite books. I kept my copies and gave them to Anne, and she passed them along to Brett. I still vividly remember scenes from my favorite parts including when the girls went begging. What a wonderful tribute to an author to have her works enjoyed by three generations of a family, and fondly remembered decades after they were published.

Thank you to the students in Minnesota, who chose Stolen Children as their favorite book this year. I am honored.

On Monday, I was in Missouri to receive the 2011 Mark Twain Reader Award for Stolen Children.  The last item on the banquet program was the announcement of the winner of the 2012 award: Runaway Twin!! The committee from the Missouri Association of School Librarians had already engraved a second bust of Mark Twain and they presented it to me then. Two fabulous honors in one night!

To make it even better, I was seated at the banquet with my dear friend, Kirby Larson, who had won the 2011 Show Me Award (picture book category) for Two Bobbies. When the 2012 Show Me Award was announced, Kirby won, for Nubs. We still can hardly believe that this happened.

To make it better yet, Anne went with me on this trip, so my daughter was in the audience to share the excitement.  What a night! 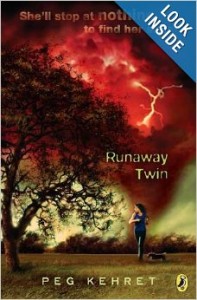 Runaway Twin has won the 2011-2012 Horned Toad Tales Award, presented by the Cypress-Fairbanks Independent School District in Houston, Texas. This is a student-choice award, voted on by kids in third, fourth, and fifth grades.

The wonderful horned toad arrived in my mail box yesterday. He looks rather ferocious in the photo; in person he measures four inches long.

Thank you to everyone in the Cypress-Fairbanks ISD for this honor.

Good news from Connecticut: Stolen Children has won the Nutmeg Award! This is the state children’s choice award, where kids vote for their favorite book. Thank you, kids in Connecticut! A big thanks, also, to the many teachers and librarians who make the award programs possible.

My Iowa Children’s Choice Award arrived yesterday – a marvelous brass school bell engraved on one side with the Iowa Library Association logo and on the other side with my name, the year, and the winning title, Stolen Children.

This is my fifth time to win the Iowa award, and my fifth school bell.  In my acceptance speech for the second one, I told how my grandkids loved to ring the first bell to call everyone to dinner. When I won again, I said that I now had three bells,  but four grandchildren and said I needed to win once more so that I could leave one of the bells to each child in my will. It became an on-going joke with Beth Elshoff, who had chaired the ICC committee the year that I won the first time. When I won bell #4, she emailed me that she was happy all of the grandkids were now taken care of.

So this year, I won my fifth bell and the timing was perfect. Seth Robert Kehret, my first great-grandchild, was born last week.

I added this beautiful plaque to my award wall this morning. Many thanks to the students in Nebraska who voted for Stolen Children as their favorite book. Thanks, also, to the teachers and librarians who participate in the Golden Sower Award program, and encourage their students to read the books on the Golden Sower list each year.

I got the BEST mail today! The New York Reading Association sent me the Charlotte Award that I won for Stolen Children. I knew the award was named for the spider in E.B. White’s wonderful book, Charlotte’s Web, but I did not expect an award like this.

The glass ball that dangles beneath my Charlotte is painted on one side with my book’s title and my name. The other side has a painted spider web and the words Charlotte Award.

Thank you to the New York Reading Association for this unique, wonderful award.